My recent Great Sweep through my studio included going through my ‘Rajasthan‘ cupboard. It was good to unfold and rearrange a collection of Indian textiles – nothing exceptionally valuable but a testimony to change as a number of hand-blocked cotton pieces are not available anymore if not screen-printed on synthetic materials (it still amazes me that women feel comfortable wearing such materials in the soaring temperatures of Indian summers.) The exercise made me reflect once more on what is making us ‘tick’. In Eve Arnold‘s words, ‘What do you hang on the walls of your mind?‘ (in: In Retrospect, Alfred A. Khnopf, New York 1995 p. IX)

The thought was triggered by finding again in the same cupboard two door decorations I once admired – and received – in an Indian village, ………. and by the memory of the demeaning remarks my interest earned me at the time from my fellow travellers: I could not be serious! 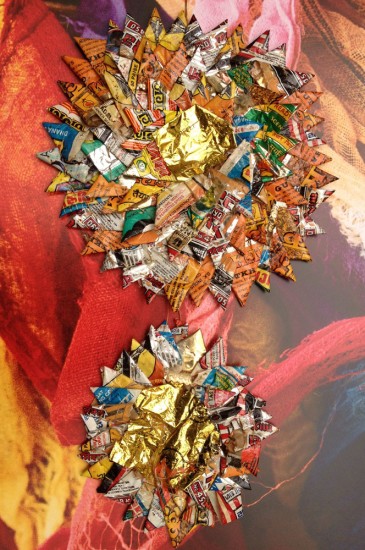 Indeed, these locally called todla are made by the village girls from empty ‘paan’ or tobacco bags they gather from their tobacco smoking fathers. They fold them like origami into regular patterns (I was gravely taught how to do it), stitch them on a round piece of discarded plastic, and if they’re lucky there might be a left-over nylon frill or some other shiny material to trim them nicely. Not a bad example of recycling lowly material to the greatest effect. 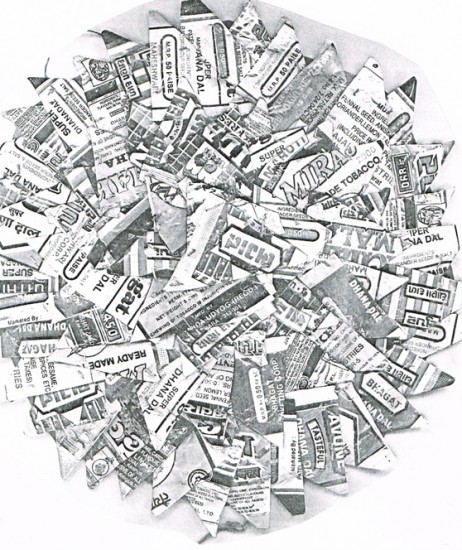 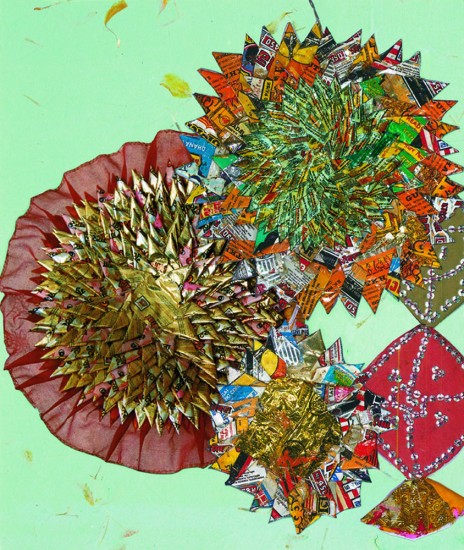 And then my fellow travellers’ reaction.

Of course these objects are not ‘serious’ nor is it ‘art’ – although, from an ethnographyic point of view…?! And yet the girls had done a wonderful job out of nothing (they were badly lacking long sewing needles which I sent them later on), their parents were visibly happy with the colourful results as there were many such todla decorating doors in a wide surrounding area, and I cherish my samples on the walls of my mind.

The context allows me to repeat one of my favourite quotations, ‘Never underestimate what looks like a fumble.’

Which brings me to my next blog entry…. on feathers.