Looking back #6: Inspiration for ‘A Resistible Force’

Today, while the Dutch are keeping their fingers crossed for the first chance of a Elfstedentocht after fifteen years and people have taken out their ice skates all over the Netherlands, I remember freezing but sunny days on the Zeeland beaches in search of images for my book A Resistible Force / Donkere Palissaden. Accompanied by our Jack Russell who tirelessly chased anything that was moving on what he considered his grounds, I lost myself in concentration, finding more and more inspiring details and taking several rolls of film as I slowly walked on. 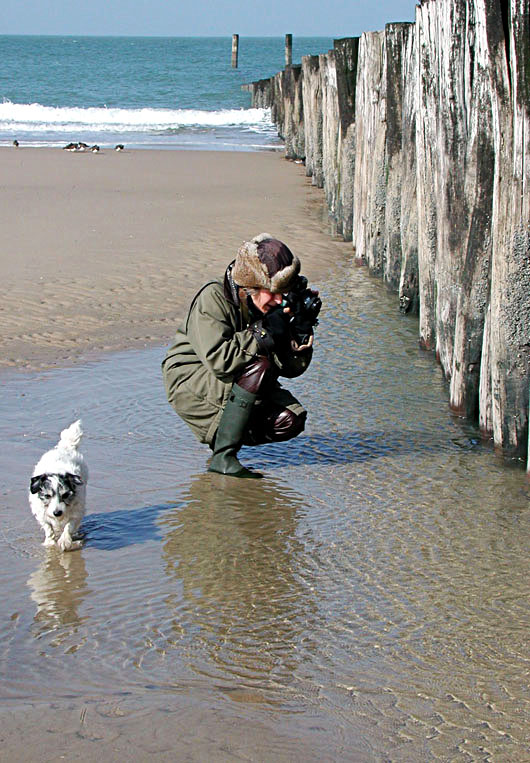 As the weather softened, I spent hours in a similar state of trance sitting against the groynes with a sketchbook. It has been a conscious choice not to include any of these drawings in the book, but they were very much part of my research, they sharpened my perception and it was fun making them. 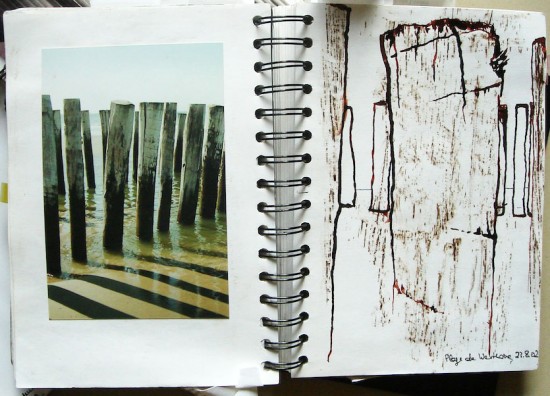 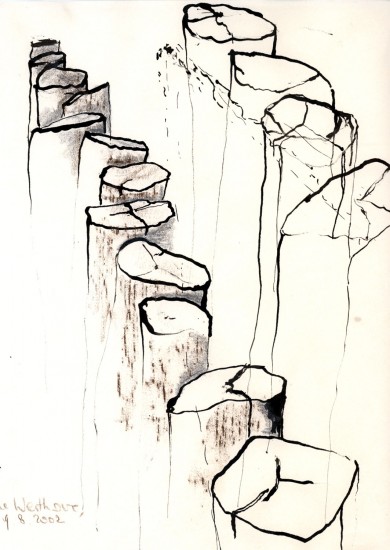 There are a good number of photographs which never made it into the book either, of course, among them my absolute favourite, which I’ve always called ‘the mystical picture’. As a true loner it didn’t seem to fit in any selection I prepared. 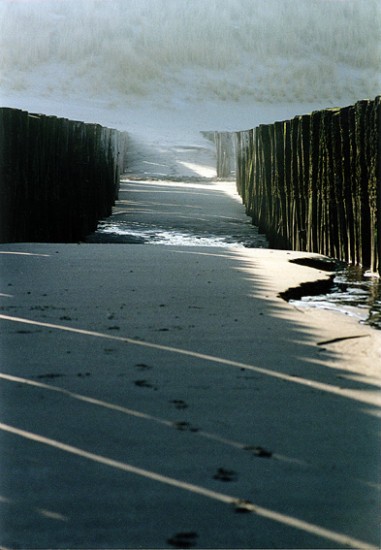 The view is towards the dune.

I took this picture early morning in January 2003 with a low sun and a cutting wind so cold that the little pools of water on top of ‘my’ breakwaters had frozen. There even were ice crystals in the sand. But I had the place all for myself. The winter high tide had washed the beach clean, leaving a long border of algae, twigs, shells and rubbish at the foot of the dunes. No footsteps on the sand other than my own, and sharply cut shapes along the rivulets where water was flowing back to the sea. Everything was glistening. It was magical, mystical…

As I was walking back home after a couple of hours I realised that in spite of the sunshine the wind had multiplied the effect of the cold so much that I could hardly open my mouth for some time.

It is on such a morning that I met the maintenance men of the Water Council as they were crossing the beach in their 4WD. We had seen one another from a distance many times but now they stopped to know why I was here so often, and I asked them the same. They offered me to join them on what I learned to be their regular watch of the coastline, and I was soon to be immersed in the subtleties of a five centuries-old system of coastal management.

The tight and traditional communities on the island of Walcheren were still providing the workforce on the beach as they had always done, but the management organisation was changing fast, and the pilings themselves were widely considered out-dated while I heard how functional they had been and how risky it would be for the lower land inside the dunes to remove them.

That is when I decided to write a book about these ‘groynes’ as they are officially called. The archives are full of documents, old maps trace their historical development, the folklore is rich in related songs and stories, there was more than enough to keep me quiet for a while. And besides, what a wonderful excuse it is to go to the beach for your work!

My focus soon became known. People began to write to me and to send me old photographs, among them a beautiful series of copper-print black-and-sepia cards dating from before WWII. The following image of the sailing yacht balancing on the groyne led me to meeting one of Holland’s most knowledgeable maritime specialists, Hans Vandersmissen, who has sadly left us since. The flag on top of the mast indicated the Maas yacht club in Rotterdam, and Hans was able to tell me that this ketch was named Garcia II and that, after spending a full tide in its precarious position near a Walcheren beach around 1920, she sailed off unharmed… 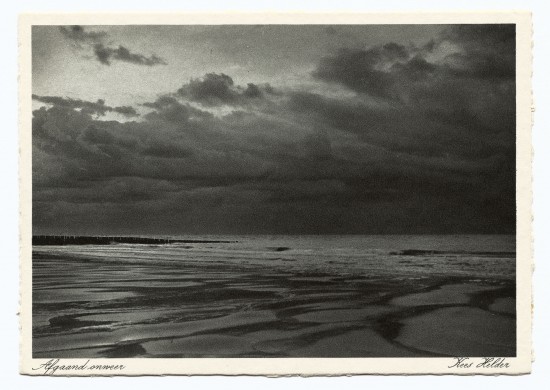 Then, half a year or so later, I heard that the Province of Zeeland had decided to officially protect this site as endangered cultural heritage. No reward could have been better.

One of my favourite pictures, which I took at the end of a summer afternoon and have named ‘the backbone’ made it onto the cover of the maritime muZEEum’s leaflet in Vlissingen, where some of my photographs are displayed as a permanent exhibition in the ‘dyke-workers’s room’.

I’m almost through my ‘looking back’ blog pages….